Decommissioning and repowering of wind farms

Since the early 2000s, wind turbines have seen significant technological developments in various areas: power and performance of generators, materials used, predictive maintenance, acoustics, reliability, integration to the grid etc. Thanks to these advances, it is now possible to install wind turbines that can produce four times more electricity, or even more, than models manufactured twenty years ago.

Kallista Energy has therefore committed to gradually replacing its first-generation wind turbines with more high-performance models. This initiative includes a threefold objective: optimising the production of renewable energy on the sites with the most wind in France; producing electricity at the most competitive price possible; and giving the communities where the wind farms are located, as well as Kallista Energy itself, visibility for the next 20 years. Even if the current wind turbines are still functional, we can optimise the production of renewable electricity by using high-performance materials over time if we upgrade and repower the plants. 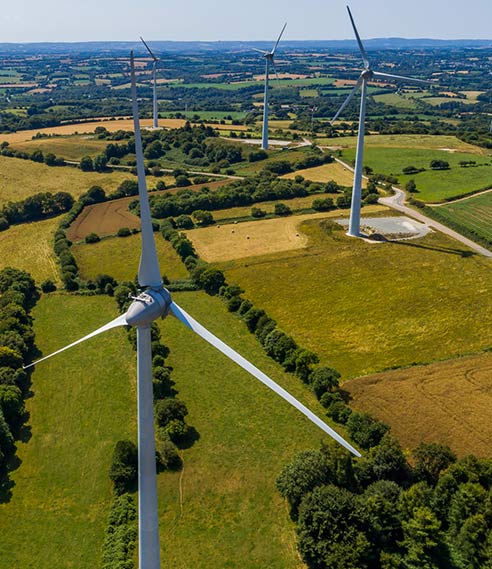 Our commitment: the complete removal of all concrete foundation blocks

Since 2020, the law requires the complete excavation of concrete foundations for wind turbines except in cases where the environmental balance sheet is unfavourable, without the dismantling target being less than 1 metre (Order of 2 June 2020).

Kallista Energy had committed to the complete removal of all foundation blocks of old wind turbines since 2017. The land is restored to its natural state or can be used for farming again.

The wind farm at Plouyé, Brittany:
First repowering project in France with complete decommissioning of the old wind turbines

Plouyé is a community in Brittany, located around one hour away from Brest. Because of its high winds, it was among the first communities in France to have a wind farm located there. At the time, four wind turbines of 0.75 MW power were installed. In 2017, Kallista Energy – which owns and operates the wind farm – replaced these turbines with more high-performance models, with the backing of Enercon and local businesses.

4x more renewable electricity with the same number of turbines

The four new turbines installed, each with power of 2.3 MW, now produce four times more electricity than before. By way of comparison, it would have been necessary to install 16 of the original models to achieve the same level of production. Repowering wind turbines therefore enables true optimisation of production without increasing the number of machines.

The old turbines were dismantled and sent to recycling plants for recovery. All the old concrete foundations were removed and the materials recovered.

Decommissioning a wind turbine: risk-free and predictable for future generations

The decommissioning of the Plouyé wind farm in Brittany confirms that this process is very well-understood and incurs no risk to the environment. It took only one week to dismantle each wind turbine and remove its foundations. All the components of the wind turbines were recovered via different channels. Moreover, the law requires that the owner of the wind farm must bear the cost of decommissioning the turbines as soon as they are installed. A financial guarantee of at least €50,000 must be pledged by the owner of the wind farm, for each turbine. Thus, the decommissioning of the wind farm at Plouyé in Brittany did not cost the community or the landowners a single cent. The same will apply for the other wind farms that will be repowered by Kallista Energy.

100% of a wind turbine can be recycled or valorised

This site uses cookies to provide you with the best browsing experience and for anonymous visit statistics.AcceptRefuseEn savoir plus
You may revoke your consent at any time by using the "Revoke Consent" button. Revoke the consent